Student Author of the Year Reception

On November 1 2019 in downtown Austin, Texas, Australian Natalie Debenham was awarded the Journal of Structural Geology’s “Student Author of the Year Award” for 2019. The award recognizes the work of the newest contributors to our discipline. The goal of offering the award is to encourage the publication of papers stemming from student research. The award is made for an outstanding paper in which the undergraduate or graduate student had a key role in the research and publication. Outstanding papers are chosen by the Editors of the Journal of Structural Geology from among a large number of student submissions. 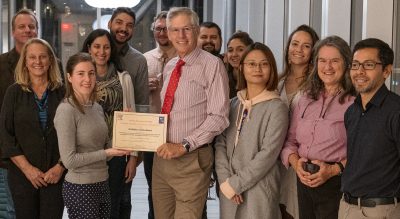 Among other manuscripts, the contribution of Natalie Debenham stands out as exemplifying a new generation of high-resolution characterization aimed at documenting and explaining fracture spatial arrangement. As described in a recent Reviews of Geophysics paper (Laubach et al., 2019), fracture pattern development has been a challenging area of research in the earth sciences for more than 100 years. Much has been learned about the spatial and temporal complexity inherent to these systems but severe challenges remain. New research underway—including the work of Natalie and her co-authors—has great potential to solve challenging fundamental and practical problems in subsurface science. The award citation, which will appear shortly on the Journal of Structural Geology news page, puts the award-winning contribution into context.

Natalie recently completed a Doctor of Philosophy in structural geology and petroleum geoscience at the Australian School of Petroleum (The University of Adelaide). Her research was focused on using natural fracture networks to predict subsurface fluid flow in Australia’s petroleum producing basins. Natalie has been recognized with several other awards in her young career, and seems poised to make a mark as a member of the structural geology community. She recently accepted a job with ExxonMobil in Melbourne.

Natalie is the 12th recipient of the Journal of Structural Geology award. The tradition of formally meeting with the student award winner and presenting the award goes back many years, and has typically included a celebratory dinner where one of the journal editors would present the award. Holding the dinner in conjunction with a professional society meeting being attended by both the awardee and one of the editors is the usual practice, but as 2019 waned, it looked unlikely that convenient mutual conference travel plans would work out. Fortunately, training connected with her new job at ExxonMobil brought Natalie to Houston in late October, and Steve Laubach, the North American Editor for Journal of Structural Geology, is based in nearby Austin. Laubach organized a reception and dinner to celebrate the award in Austin.

The reception was held on the 34th floor of one of Austin’s new tall towers.  The young student authors and their mentors attending the reception were undoubtedly inspired to try to follow in Natalie’s footprints with their next submissions to the journal.

The reception was an opportunity for structural geologists with shared interests from opposite sides of the world to interact. Austin has a large community of scientists with interests in fracture patterns and how they form. Attending the reception were senior professors, researchers, postdoctoral fellows, and graduate students from The University of Texas at Austin departments of geological sciences and petroleum and geosystems engineering and from the Bureau of Economic Geology.

Debenham’s research was influenced by research by Laubach and Diaz-Tushman (2009) [view] carried out as part of the Structural Diagenesis Initiative. It is very gratifying to see the growing influence of our program for the next generation of geoscience leaders.

Fracture pattern development is a research focus of the Structural Diagenesis Initiative. Some recent papers include: