An initiative paper will receive the AAPG Petroleum Structure & Geomechanics Division Best Recent Paper Award at the 2019 ACE meeting in San Antonio in May.

The paper, Correlation analysis of fracture arrangement in space by Randy Marrett, Julia Gale, Leonel Gomez and Steve Laubach was published in the March 2018 issue of Journal of Structural Geology.

Correlation analysis of fracture arrangement in space makes the case that opening-mode fracture or fault spacings cannot be effectively characterized using traditional statistical techniques because most ignore the sequence of fracture spacings and therefore are not designed to study spatial arrangement. For instance, datasets with different spatial arrangements can have identical statistics of spacing, such as average or median. 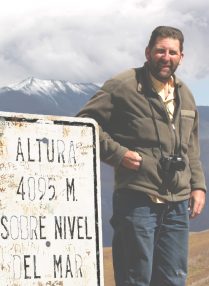 The paper is based on Randy Marrett’s inspiration. The topic of spatial arrangement and the new approach to unraveling it was also central to Leonel Gomez’s UT dissertation research. Randy’s brilliance was to combine the recognition of the importance of sequence with his capacity to invent a technique, Normalized Correlation Count (NCC), that overcomes the limitations of previous approaches while providing a quantitative comparison against random. No longer should one say this 1D fracture dataset looks random. We can be more quantitative and say whether or not data plot within statistical limits for random.

This paper was a long time in gestation. The inspiration came on a trip to describe core in Ciudad del Carmen in June 2000, and the concept of Normalized Correlation Count and a manuscript were already in hand by March 2001. By 2004 an early version of the code was already being used to establish most of the different types of spatial arrangements reported in the paper, some of which cannot be intuitively discerned. And as some in the community will know, through informal sharing with students and colleagues, the creative ideas in this paper began influencing thinking about fracture spacing long before formal publication. Although we cannot recommend this pace for getting a paper out, the paper, as published, benefited from much careful thought and transformative improvements in the software.

Marrett’s brilliance is combined with idiosyncrasies. For him, publication was only warranted if NCC had software that was user-friendly, standalone, interactive, free-to-download, and suitable for both Mac and Windows. Now you can understand why it took 15+ years to publish.

The paper and software, CorrCount, are both published open access. Since the technique was invented, we have used the time to explore possible uses of NCC and to learn the nuances of interpreting NCC plots. For instance, we have documented a range of spatial arrangement patterns in outcrop and subsurface fracture data, including some described in companion papers in the special issue of the journal in which this paper appeared (some of which are listed below).

The implications for better understanding of fracture processes generally are substantial. We think the paper and associated software will have a long life contributing to practical and fundamental progress in petroleum structure and geomechanics. 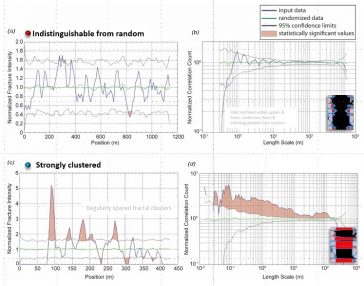 One example of the use of the technique is illustrated here. The figure is modified from John Li et al.’s 2018 Journal of Structural Geology paper that shows evidence of mechanical impact of cement on spatial arrangement. The diagram compares fractures in Cretaceous Frontier Formation sandstone sharing ENE strike but differing burial conditions and degrees of quartz cement spanning potential. Here clustering is quantified using Marrett et al.’s normalized correlation count method. The insets illustrate the contrast in degree of cement spanning fractures at the localities (the diagrams are quartz rinds and quartz bridges from Lander & Laubach 2015). Shaded areas of curves show statistically significant values.

In the first row, (a) shows normalized fracture intensity variation and (b) shows normalized correlation count for spatial arrangements. The diagrams show values are within a 95% confidence envelope, so patterns are indistinguishable from random. This pattern is from outcrop, where cool temperature histories during fracture led to low spanning potential, and little mechanical interaction between quartz cement bonds and fracture opening.

Our response to the award nomination thanked our industry colleagues—many of whom are part of the Division—and we repeat that thanks here. Our industry partners have been unstinting with advice, guidance, support, and comradeship in the quest to conquer the challenge of reservoir fractures. We hope they find CorrCount software an unevenly spaced step or three in the right direction.

The paper is published open access and the CorrCount software is available via the link:

Some other recent papers that use or discuss the CorrCount software include: