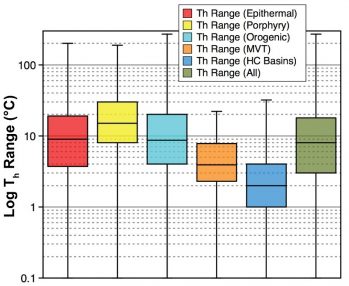 Box and whisker plots showing range in homogenization temperature within individual fluid inclusion assemblages sorted according to geologic environment. Shown are complete range in observed Th ranges, 25th and 75th percentiles, and median range for a given environment.

The history of the pressure, temperature, and composition of fluids is fundamental to understanding how the Earth works. This type of information is also of great practical value to ore deposit and hydrocarbon exploration. Such thermometric data is obtained from minute amounts of fluids trapped by various natural processes within minerals.

Analysis of fluid inclusions is a standard approach for research on sedimentary, metamorphic and igneous rocks. As part of the Structural Diagenesis Initiative, we are using fluid inclusions to help find out when and why fractures form.

Although a rigorous methodology for the collection of fluid inclusion data has been developed over the years, acceptable or achievable ranges in temperature data for groups of coeval fluid inclusions have not been rigorously evaluated and defined. The goal of the recently published paper by Fall and Bodnar is to determine ranges in homogenization temperature (Th) for well-characterized fluid inclusion assemblages (FIAs) from various geologic environments in an attempt to provide guidance concerning the achievable range in Th.

This combined original research/review paper addresses a fundamental question in fluid inclusion studies by revisiting the concept of Fluid Inclusion Assemblages (FIA) and asking: if FIAs represent inclusions trapped at the same time during the same fluid event, as the result of formation of a mineral growth zone or sealing or healing of a fracture, then 1) what are the uncertainties associated with the temperature of that event, and 2) what are acceptable ranges of temperatures for FIAs trapped in various geologic environments that will allow tests of the reliability of microthermometric data?

The questions were answered by examining a large set of original and literature-based microthermometric data from a large number of fluid events in various geologic environments, collected within a rigorous temporal and spatial (paragenetic) framework.

The paper offers guidelines for developing a complete fluid pressure-temperature-fluid composition history, and methods to assess the reliability of new or already published microthermometric data.

The range in homogenization temperatures of fluid inclusions within well constrained FIAs was determined as follows, and as shown in the first illustration: 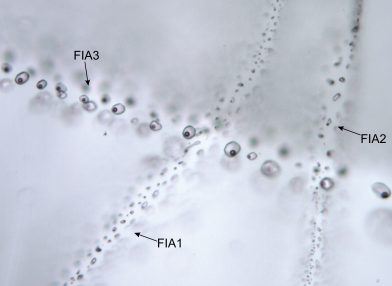 While all environments show some FIAs in which all of the fluid inclusions homogenize at essentially the same temperature (range = ≤1 °C), Fall and Bodnar propose that the median range in homogenization temperature represents a reasonable and achievable constraint on the uncertainty associated with the temperature of a fluid event in the environments examined. The results indicate that approximately ~80% of all FIAs examined show a temperature range of ≤20 °C (~50% ≤10 °C; Figure 2).

These data suggest that the temperature of an individual fluid event can be constrained to within a few tens of °C with careful selection of well-constrained FIAs.