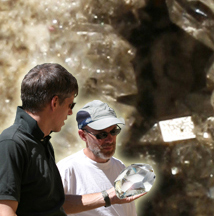 A new model accounts for crystal growth patterns and internal textures in quartz cement in sandstone fractures, including massive sealing deposits, thin rinds or veneers that line open fracture surfaces, and bridge structures that span otherwise open fractures. High-resolution cathodoluminescence imaging of bridge structures and massive sealing deposits indicates that they form in association with repeated micron-scale fracturing whereas thin rinds do not.

Bridge structures form at fracture opening rates that are intermediate between the massive sealing and rind cases and are associated with crystallographic orientations that allow growth to span the fracture between fracturing events. Subsequent fractures break the spanned crystal, introducing new, fast-growing non-euhedral nucleation surfaces that grow more rapidly than the euhedral faces of non-spanning crystals.

As the ratio of fracture opening to quartz growth rate increases, the proportion of overgrowths that span the fracture decreases and the c-axis orientations for these crystals gets progressively closer to perpendicular to the fracture wall until the maximum spanning limit is reached. Simulation results also reproduce “stretched crystal”, “radiator structure”, and “elongate blocky” textures in metamorphic quartz veins.

The model replicates a well-characterized quartz bridge from the Cretaceous Travis Peak Formation as well as quartz cement abundances, internal textures, and morphologies in the sandstone host rock and fracture zone using the same kinetic parameters while honoring fluid-inclusion and thermal-history constraints. The same fundamental driving forces, in both in the host rock and fracture system, are responsible for quartz cementation with the only significant difference being the creation of new fracture surfaces (non-euhedral surface area) for cases where overgrowths span fractures between fracturing events. Rates of fracture growth and sealing may be inferred from fracture cement textures using model results.

Although the East Texas example shown above considers extremely slow opening rates in a passive-margin setting, the model is applicable to other fracture types in sedimentary basins, as well as to some aspects of metamorphic vein formation. For example, the model reproduces both “stretching” and “elongate blocky” textures in metamorphic veins as shown here.

The animations above are from Lander and Laubach 2015, figures 18 and 20b.

By Rob Lander and Steve Laubach