The Snowball Earth Hypothesis comes from evidence for two severe, multi-million year long, glaciation intervals on Earth during the Neoproterozoic Era. These glacial intervals, known as the Sturtian (~717-659 Ma) and the Marinoan (~645-635 Ma) glaciations, are considered to have been global in extent (panglacial) and collectively define the Cryogenian Period. These glaciation events are  significant in Earth history as they occurred during a second major oxygenation event known as the Neoproterozoic Oxidation Event (NOE); the first major oxygenation event, known as the Great Oxygenation Event (GOE), occurred at the Archean-Proterozoic boundary. During Neoproterozoic glacial periods, geologic evidence suggests that ice sheets may have extended to the equator. Such extensive ice sheets would have restricted the interaction between the ocean and the atmosphere, dampened the hydrologic cycle and extent of silicate weathering, and changed the chemical composition of sea water to a more reducing state.  The worldwide occurrence of cap carbonate successions, immediately following deposition of Cryogenian glacial deposits, suggests deglaciations were associated with rapid changes towards greenhouse climate conditions. Tremendously high atmospheric CO2 levels, built up slowly from volcanic outgassing over millions of years, are thought to have triggered melting of low latitude ice sheets, which decreased global albedo and stimulated rapid and continuous melting of glacial ice sheets.

In this study, we find that most cap carbonates contain mostly a mineralogy composition of dolomite CaMg(CO3)2 as opposed to calcium carbonate (CaCO3) except for the Assem Limestone, and Scout Mountain Member. About one-third of the samples analyzed in the study show potential of poor preservation due to post-diagenetic alteration, with post-Sturtian samples being affected the most. Rare Earth Elements geochemical analyses focusing on Ce and Eu anomalies for this study suggest that Pre-Cryogenian locations lack a Ce anomaly and show a minor positive Eu anomaly exhibiting consistency with oceanic anoxia during this time. There is variation in localities during the Syn-Sturtian and Post-Sturtian due to different Ce and Eu anomalies showing anoxic conditions in some localities such as Scout Mountain Member and Tindelpina Shale (lack of Ce and slight positive Eu anomalies), and oxygen-rich conditions in other locations such as the Rasthof Formation (negative Ce and positive Eu anomalies). The Post-Marinoan exhibits oxygenated environments across localities due to negative Ce anomalies and non-existent or slightly negative Eu anomalies. With these results, evidence shows that oceanic conditions during glaciation periods were homogenized during their perspective time periods for the most part except for regional variations. 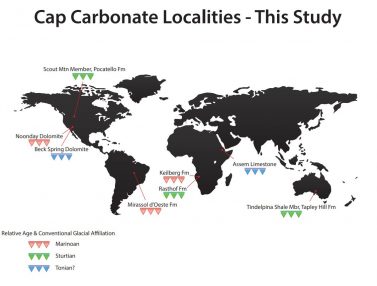