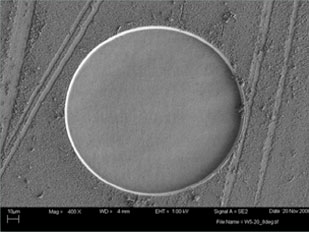 LA-ICP-MS is a useful analytical technique to derive spatial compositional information from solid sample surfaces. Spots or line scans are typically analyzed. The laser essentially acts as a high precision photon “jackhammer”, which generates a particulate aerosol that is carried to the torch and sample introduction system of the ICP-MS. Laser ablation energy is concentrated at a set focal distance, thus samples appropriate for LA-ICP-MS should present a flat uniform surface. Thin sections and polished slabs work very well and the laser cells are designed to accommodate such samples. The standard laser cell can accommodate a ~6 cm diameter sphere; although spherical samples are NOT encouraged. Laser control parameters for optimal aerosol generation can vary appreciably depending on the sample material. 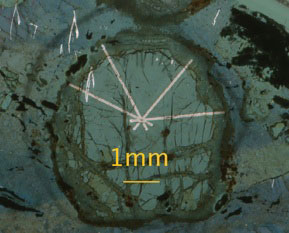 One of the challenges for LA-ICP-MS is calibration. Given a constant laser source, the ablation efficiency (laser coupling) can vary markedly among different materials. To compensate for this variation, the intensity ratio of an analyte to an internal standard in a sample can be normalized to that for a standard of known composition. For silicate materials (rocks, glasses, ceramics), synthetic reference materials (typically glasses like NIST 612, 610) are often used for normalization; there are also carbonate and sulfide reference standards.  Accordingly trace element determinations involve analyses of both standards and unknowns.

Rectangular spot options (slits) were added to the UP 193-FX laser system in May, 2010.  The slit options (j-m shown below) are ideal for performing high-resolution trace element transects across zoned minerals or cement bands while minimizing aliasing in the temporal growth domain. Slit dimensions range between 50 and 150µm in length and 5 to 25µm in width.

Table of spot diameters, slit dimensions and (cross-sectional areas). All units in µm or µm^2. 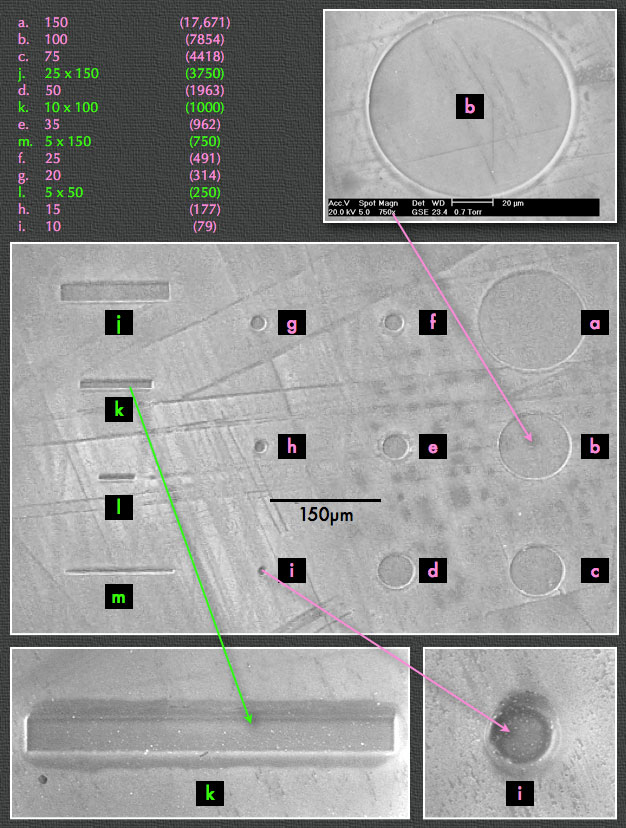 Close-up view of the 10 x 100µm slit and 10µm spot. This slit has a cross-sectional area nearly 13 times larger than the 10µm spot, slightly larger than that for a 35µm spot (see table above). Scanning with the slit aperture parallel to mineral phase growth bands thus benefits from much larger analyte intensities without sacrificing temporal/spacial resolution.