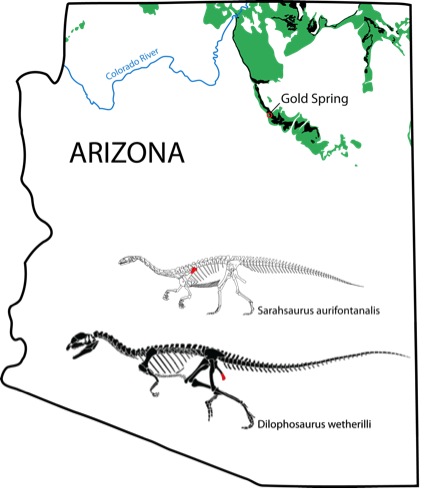 Fossil bone records a wealth of data used to explore the evolutionary history of vertebrate life, the growth and development of individuals during their lifetime, and the taphonomic processes that occur before organismal remains become a part of the fossil record. As geochemical technology advances, fossil bone is becoming increasingly useful in investigating how organic and inorganic chemistry affect the interaction between the rock and fossil records. Direct in-situ techniques like LA-ICP-MS allow researchers to ask questions surrounding groundwater interactions, provenance, trace element uptake, and even radiometric dates of fossil bones. These Early Jurassic dinosaur bones, belonging to the long-necked Sarahsaurus aurifontanalis and meat-eating Dilophosaurus wetherilli, are built from hydroxylapatite that comprises the mineral phase of bone tissue, providing structure to the collagen, osteocytes, blood vessels, and nerves in the bone that has long since decomposed. Five line scans were performed on each of the two thin sections of dinosaur bones while analyzing for 29Si , 31P, 55Mn, 57Fe, 86Sr, 89Y, 137Ba, 208Pb, 232Th, and 238U. 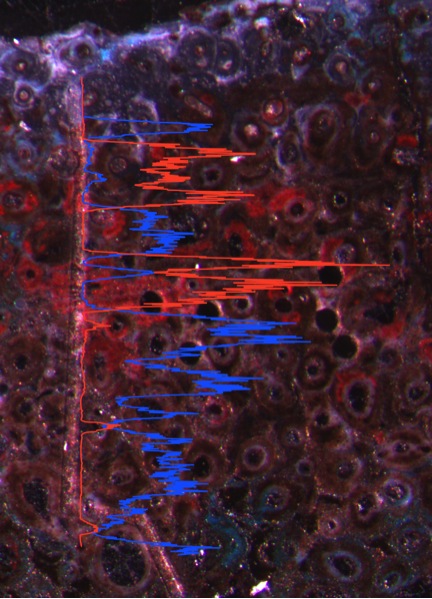 Elemental concentrations generally decrease moving towards the centers of each bone. The decrease in the concentration of P towards the middle of the bone may suggest differing degrees of recrystallization in the fossil bone. Higher concentrations around the outside of the bone indicate more recrystallization and hence, a higher degree of fossilization. Phosphorus is the most abundant isotope in the bone (between 150,000 and 180,000 ppm), which is to be expected, as it is a major component of bioapatite. Strontium easily substitutes for Ca in bioapatite, and the relative ratios of P and Sr behave similarly through each line. The permineralized pore spaces are filled with calcite and are depleted in Mn, Fe, Y, Ba, and U.  The relative concentrations of Mn and Fe share an inverse relationship throughout the analyses. Reflected light microscopic images confirm that highly oxidized regions of the bones are bright red where oxidized iron is found in high concentrations. Barium is enriched in the meduallary cavity of the bones where secondary barite has crystallized. Thorium is the least concentrated analyte measured in the bones and is found almost exclusively in the outer centimeter and in larger vacuities. Uranium concentrations are fairly uniform across the bone thin sections but are quite enriched at about 1,000 ppm. The concentration of Pb is much more variable, which would cause direct U-Pb dating of the bioapatite in fossil bone to result in inaccurate dates. These line scans highlight the open-system behavior of bone and provide insight into the preservational history of these organismal remains since their burial in the Early Jurassic.