The U.S. Department of Energy (DOE) has awarded the University of Texas at Austin’s Institute for Geophysics (UTIG) funding for a project to drill, sample and analyze deposits of frozen methane under the Gulf of Mexico that hold enormous potential to increase the world’s energy supply.

The agreement, which was still being finalized at press time, includes roughly $41 million in DOE funding and $23 million from industry interested in the project and the research partners.

The grant funding will allow researchers to advance scientific understanding of methane hydrate, a substance found in abundance beneath the ocean floor. In addition to UTIG, the study includes researchers from The Ohio State University, Columbia University’s Lamont Doherty Earth Observatory, the Consortium for Ocean Leadership, and the US Geological Survey.

Estimates vary on the amount of energy that could be produced from methane hydrate worldwide, but the potential is huge.

In the Gulf of Mexico, where the team will be sampling, there is estimated to be about 7,000 trillion cubic feet (tcf) of methane in sand-dominated reservoirs located near the seafloor. For comparison, the United States used about 26 tcf of natural gas in 2013. So, methane hydrates have the potential to contribute to long-term energy security within the United States and abroad.

Data gathered during the four-year project will help scientists to more accurately estimate the occurrence and distribution of marine hydrates and lay the groundwork for future production efforts. 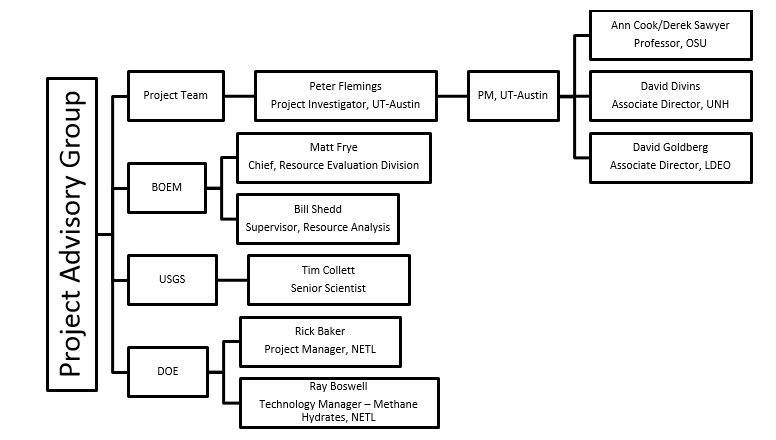 GOM2 in the News

Powering the Future: Why UT is the Energy University
Energy is such a constant presence in our lives, we often take it for granted. Like the clean water that runs from our taps, we just expect energy to be cheap and ever-present, whether it’s the electricity that charges our phones, the natural gas that heats our houses, or the oil that makes our cars run. But the fact is, all of this energy has to come from somewhere.

Jackson School to Lead $58 Million Effort to Study Potential New Energy Source
A research team led by the University of Texas at Austin has been awarded approximately $58 million to analyze deposits of frozen methane under the Gulf of Mexico that hold enormous potential to increase the world’s energy supply.

Methane Hydrate: Fire, Ice, and a Huge Quantity of Potential Energy
Found near the ocean floor and beneath Arctic permafrost, methane hydrate is a mysterious icy substance that burns when lit and holds vast amounts of potential energy. Researchers at the University of Texas at Austin’s Jackson School of Geosciences are leading a four-year project to learn more about methane hydrate and how it could be used in the future.

Episode 159: Dr. Peter Flemings
An interview with Dr. Flemings on the energymakers show.

UT gets money to study new energy source in Gulf
The University of Texas at Austin has won $58 million to investigate a potentially massive energy resource: methane trapped in ice-like crystals under the Gulf of Mexico and oceans around the world.

UT-led team gets $58 million to study Gulf methane deposits
A research team led by the University of Texas at Austin has been awarded $58 million to analyze deposits of energy-rich methane hydrate—sometimes called fire and ice or flammable ice—beneath the Gulf of Mexico.

The University of Texas at Austin

University of Texas Institute for Geophysics

US Department of Energy (DOE)