The UT ES will act as a “convener” for the campus community, serving to unite students interested in energy issues with faculty and others in the search of sustainable energy security.

Each session of the UT ES will be video recorded and the recordings, along with presentation slides, will be posted on the Energy Institute’s Web site following completion of the sessions. 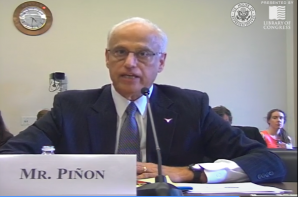 The Latin American Forum is a unique program that addresses a critical need to bring together government and industry decision makers, scholars and scientists, to foster dialogue around energy and environmental issues. The friendships and partnerships being formed by participants will, if properly maintained, impact our future ability to educate students, transfer knowledge, and make a difference for our hemisphere.

A roundtable discussion with the Guyana Minister of Natural Resources and the Environment, the Hon. Robert M. Persaud.

Jorge Piñon, Associate Director of the Latin America and Caribbean Program at the University of Texas at Austin Jackson School of Geosciences, will also discuss investing in Latin America’s energy sector and provide an analysis of the associated risks. This complimentary event will take place on December 20, 2012 from 8:30 am to 10:30am. The program will be held at Baker & McKenzie’s New York office.

According to the 2012 United States Geological Survey Assessment of Undiscovered Conventional Oil and Gas Resources of South America and The Caribbean, the Guyana-Suriname Basin has the second largest undiscovered oil reserves in Latin America after Brazil. The USGS assessment reflects a mean total of undiscovered reserves in South America and Caribbean at 125,900 MMBO. Among the international oil companies doing development work in the Guyana-Suriname Basin today are Repsol, Exxon, Tullow, Anadarko, Chevron, Shell, Total and CGX.