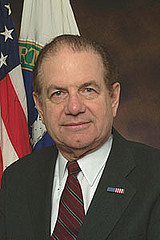 Orbach also was responsible for the department's implementation of the president's American Competitiveness Initiative, designed to help drive continued U.S. economic growth. He led the department's efforts to transfer technologies from Department of Energy national laboratories and facilities to the global marketplace.

From the time of his Senate confirmation in 2002, Orbach also was the 14th director of the Office of Science (SC) at the Department of Energy (DOE). He managed an organization that was the third largest federal sponsor of basic research in the United States, the primary supporter of the physical sciences in the country and one of the premier science organizations in the world.

Orbach received his Bachelor of Science degree in physics from the California Institute of Technology in 1956. He received his Ph.D. degree in physics from the University of California, Berkeley, in 1960 and was elected to Phi Beta Kappa. He began his academic career as a postdoctoral fellow at Oxford University in 1960 and became an assistant professor of applied physics at Harvard University in 1961. He joined the faculty of UCLA two years later as an associate professor and became a professor in 1966.

Orbach's research in theoretical and experimental physics has resulted in the publication of more than 240 scientific articles. He has received numerous honors as a scholar including two Alfred P. Sloan Foundation Fellowships, a National Science Foundation Senior Postdoctoral Fellowship at Oxford University, a John Simon Guggenheim Memorial Foundation Fellowship at Tel Aviv University, the Joliot Curie Professorship at the Ecole Superieure de Physique et Chimie Industrielle de la Ville de Paris, the Lorentz Professorship at the University of Leiden in the Netherlands, the 1991-1992 Andrew Lawson Memorial Lecturer at University of California at Riverside, the 2004 Arnold O. Beckman Lecturer in Science and Innovation at the University of Illinois at Urbana-Champaign and the Outstanding Alumni Award from the California Institute of Technology in 2005.

Orbach is a fellow of the American Physical Society and the American Association for the Advancement of Science. He has held numerous visiting professorships at universities around the world and is a member of 20 scientific, professional and civic boards.