Why Marine Fossils around Austin? 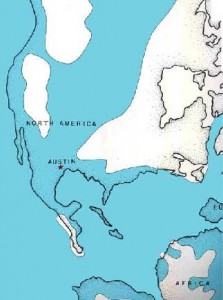 A view of the later Cretaceous marine world around Austin, Texas

The blue on this map shows one view of the maximum extent of the sea that covered parts of North America in the Late Cretaceous (100-65 million years ago). The heavy lines indicate modern shorelines. Notice that the positions of the continents were different from what they are today.  Geologists believe that conditions in this sea were similar to those in the Florida Keys today.

In the Early Cretaceous (135-100 m.y.a.), sea level was lower, and parts of Austin were in the intertidal zone. These shallow conditions were ideal for wandering dinosaurs and development of algal/bacterial mats. Marine organisms flourished in this sea, died, and were incorporated in the sediments on the sea floor, in various stages of decay. Later uplift exposed these now lithified sediments, and weathering or human actions reveal the organisms (now fossils).

Investigate more about the changing Paleomap.