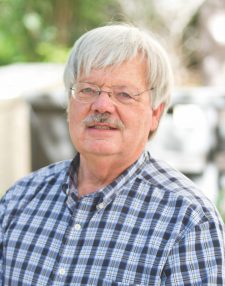 Bob was a professor in the Department of Geological Sciences for more than a decade and held the Shell Centennial Chair in Geophysics.

Bob was actively involved in all aspects of geophysical methods applied to petroleum problems for over 45 years. He served as a professor for 14 years, during which he founded the Exploration and Development Geophysics Education and Research (EDGER) Forum. Over the years, the forum has supported dozens of industry-bound graduate students and cooperative research projects with industry sponsors. Before joining the department, Bob spent many years in industry – including 10 years as a practicing exploration and special problems geophysicist, five years with the major international contractor Petty-Ray Geosource, and 12 years supervising and managing research activities with Texaco.

Bob was born on Dec. 10, 1943, in California. He earned a B.S. in physics (1967) from California State University–Northridge; an M.S. in applied geophysics (1970) from the University of Houston; and a Ph.D in geological sciences (1975) from Columbia University.

His research activities have included all aspects of seismology applied to exploration, development and production of hydrocarbons, with a focus on the interpretation and analysis of seismic data to extract rock, reservoir and fluid properties. Recent activities expanded these efforts to include characterization of resource shales to optimize the identification of the most productive parts of the shales.

Bob will be greatly missed.

You can view his obituary, sign an online guestbook at Legacy.com, or learn more about his career on the SEG Wiki.