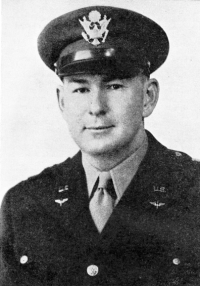 Captain Robert Hamilton Cuyler, Assistant Director of the Army Air Forces, Ground Training Advisory Unit, Central Instructors School, Randolph Field, Texas, was killed in airplane accident near Blanco, Texas, on March 13, 1944, while on a training mission. Captain Cuyler was on leave of absence as an associate professor of Geology at UT while serving with the Army Air Corps.

Captain Cuyler was born in Austin, Texas, on May 28, 1908. In 1911 the Cuyler family moved to North Carolina, where they lived for six years. In 1917 they returned to Austin and, at the age of 15, Cuyler graduated from high school. He completed his BA degree (1926) at UT in three years. He received his MA degree from UT in 1927 and his PhD degree in 1931. Dr. Cuyler was appointed as an Instructor in the Department of Geology in 1927 and was continuously a member of the faculty from that time until his death. Captain Cuyler’s chief interest was in micropaleontology and subsurface geology, and he developed outstanding courses in these branches of geology. With an unusual capacity for organization, he scheduled the subject matter for his courses in detail, usually passing out a mimeographed outline for the full semester’s work on the first day of class. Everything was done thoroughly and completely, even to the smallest detail. He instilled the same feeling in his students and insisted that everything that they turned in should represent their best effort. His success and popularity as a teacher is attested by the large enrollment in his classes and the number of successful geologists whose interest in the science was due to his inspiration. With an outstanding memory for names and faces, he could recall the full name, hometown, and other details of hundreds of students years after they had graduated. He frequently astonished his classes by calling each member by their full name on the second meeting of the class. Many of his students became personal friends, and he followed their work closely after they left school. Cuyler supervised 20 MA students and one PhD student, most of whom worked on subsurface problems.

Professor Cuyler spent a number of vacations actively working in the oil industry, a field in which he was unusually successful. Much of this work was with Mr. John F. Camp, of San Antonio. His association with Mr. Camp resulted in one of the closest friendships of his life.

Professor Cuyler was also interested in fieldwork and for many years assisted in teaching the summer field course in geology offered by UT. In addition to his interest in geology, Cuyler was well informed in botany, especially field botany, which he used to advantage in his field studies.

Early in 1940 Cuyler submitted through The University of Texas, a proposal to the Works Progress Administration for a project to make copies of all logs and other subsurface data on wells drilled in Texas. This material was to be used as a source of information for subsurface studies and as a permanent reference collection. The “Well Logging Project” was approved, and work under the supervision of Professor Cuyler was started in September, 1940, at Houston. The project ran for two years and employed an average of about 125 persons per day. The project included the preparation of a card for each well drilled in Texas, giving all pertinent data available on the well. In addition, a collection of sample and paleontologic logs, a collection of plotted driller’s logs, and a collection of electrical logs were assembled. A total of 120,000 plotted driller’s logs, 10,500 electrical logs, and several thousand sample logs were in the collection. This collection, together with several million well samples, many of which Cuyler was instrumental in obtaining, became the nucleus of the collection at the Core Research Center of the Bureau of Economic Geology of UT-Austin.

Although Captain Cuyler was young in years at the time of his death, he had already distinguished himself in geology, as is attested by his election to membership in various learned societies and to positions of trust in these organizations. He was a member of Sigma Gamma Epsilon (honorary geologic fraternity) and a past president of the local Chapter. He became a member of the American Association of Petroleum Geologists in 1929 and was elected a Fellow of the Geological Society of America in 1939. He was also a member of Sigma Xi (President of the Texas Chapter, 1936), the Paleontological Society of America, Society of Economic Paleontologists and Mineralogists, Southwestern Geological Society (President, 1928), University Science Club (President, 1933), and the Texas Academy of Science. He was listed in the 1938 edition of American Men of Science.