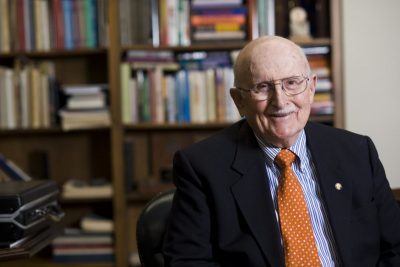 The University of Texas at Austin mourns the loss of Peter T. Flawn, who was twice the president of the university and one of its most distinguished leaders. President Flawn, a renowned geologist, spearheaded UT Austin’s transformation into a top public research university beginning in the 1980s.

He died overnight Sunday at age 91.

“Peter was a visionary leader at UT, a beloved friend and a wise counselor to me and many university presidents,” said Gregory L. Fenves, president of UT Austin. “Whenever the university sought his help — from his earliest days doing geology research in West Texas through his time as president emeritus — Peter always answered the call. His contributions to our great university were immense and we will miss him deeply.”

Born in 1926, Flawn studied at Oberlin College and earned his master’s degree and doctorate in geology at Yale University. In 1949, after a stint working at the U.S. Geological Survey, he began an illustrious career in geological research at UT Austin’s Bureau of Economic Geology, a research unit that serves as the state geologic survey. From 1960 to 1970 Flawn was director of the bureau and a professor in UT Austin’s Department of Geological Sciences. He became professor of geological sciences and public affairs in 1970 and later the Leonidas T. Barrow Professor of Mineral Resources.

From 1973 to 1977, Flawn was the second president of UT San Antonio, where his accomplishments included a new core curriculum, higher admission standards and a dramatic increase in the number of endowed faculty positions. Flawn was president when UT San Antonio’s main campus began holding classes in 1975.

When he returned to UT Austin to become president from 1979 to 1985, Flawn declared a “war on mediocrity,” pushing the university to pursue greater academic rigor and excellence. He helped raise the university’s number of faculty endowments from 112 to 851 with the Centennial campaign in the early 1980s. During his six-year tenure as president, sponsored research awards grew to $100 million and five new research buildings were built. The Academic Center was renamed the Peter T. Flawn Academic Center in his honor in 1985, when Flawn retired and became president emeritus.

Flawn returned to serve the university in 1997 at age 71 as interim president during the search that culminated in the presidency of Larry Faulkner. Not content to be a caretaker president, Flawn launched the ambitious $1 billion capital campaign, “We’re Texas.” He also actively dealt with changes in admissions policy in the aftermath of the Hopwood v. Texas decision banning racial consideration in admissions.

“When one looks back at the intellectual giants that led The University of Texas, Peter Flawn’s name will be right at the top of the list,” said William McRaven, chancellor of The University of Texas System. “Peter was a special person and over the last two years, I developed a deep respect, admiration, and friendship with this wonderful man. He dedicated his life to educating the young men and women at UT Austin, UT San Antonio and throughout the state of Texas. We will miss him dearly.”

While many people know Flawn as a university president, he also enjoyed a distinguished career as a geologist and research professor. He was elected to the National Academy of Engineering in 1974. He served as president of the Geological Society of America in 1978 and president of the American Geosciences Institute (AGI) in 1988. In 1993, AGI awarded him their most prestigious honor, the Ian Campbell Medal.

“Peter Flawn was inspiring as both a geologist and an academic leader,” said Sharon Mosher, dean of the Jackson School of Geosciences. “His field maps and publications on West Texas geology were an essential source for generations of students. And as president, his push for excellence at UT made a deep impression on me and many professors in the 1980s, leading to profound and positive changes in the university.”

William L. Fisher, inaugural dean of the Jackson School of Geosciences and current holder of the Leonidas T. Barrow Centennial Chair in Mineral Resources, was a close friend and longstanding colleague.

“When I came to the university 58 years ago, Peter Flawn and I had adjacent offices, as we have had in recent years,” said Fisher. “A very significant part of the standing of UT Austin is due directly to the leadership and vision of Peter Flawn. He was a good friend and my prime mentor through the years. I often sought his advice and counsel which was always insightful, wise and to the point. We have lost a truly great leader.”

He is survived by a daughter, son-in-law, four grandchildren and nine great-grandchildren, and was predeceased by his wife, Priscilla Pond Flawn (1926-2016) and his daughter Laura B. Flawn, M.D. The Flawn family has asked that gifts in memory of Dr. Flawn be made to support the Priscilla Pond Flawn Child and Family Laboratory Endowment at UT Austin.

Memorial initially published by UT News on May 7, 2017